UPDATE: Due to concerns over the transmission of COVID-19, this performance has been postponed to a later date. We will update this page with new information as it becomes available. Thank you for your understanding! 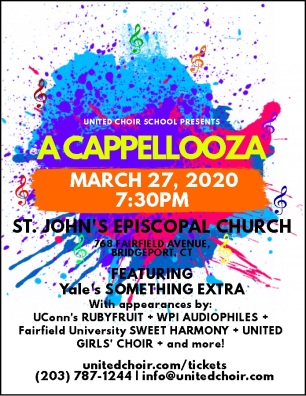 Many outstanding a cappella singing groups from throughout the Northeast will take the stage for an amazing “A Cappellooza” concert on Friday, March 27, 2020 at 7:30pm at St. John’s Episcopal Church, 768 Fairfield Avenue, Bridgeport, CT. Featured ensembles will include Yale’s Something Extra and the Elm City Girls’ Choir. Other participating ensembles will include UConn Rubyfruit, UConn Chordials, WPI Audiophiles, Fairfield University Sweet Harmony, SCSU NOTEorious, Riverside Rhapsody, United Girls’ Choir, and Hopkins’ Triple Trio. Repertoire will include contemporary pop songs, jazz standards, and familiar tunes that everyone loves!

Tickets are available in advance or at the door for the following prices:

Founded in 1977, Something Extra is Yale University’s premier all-female a cappella group that performs a varied repertoire of pop, jazz, indie rock, folk songs, spirituals, and traditional Yale songs. The group has toured throughout North America, Europe, and the Caribbean, and has performed at prestigious venues such as the White House, US embassies, and on the set of “Jeopardy!”.